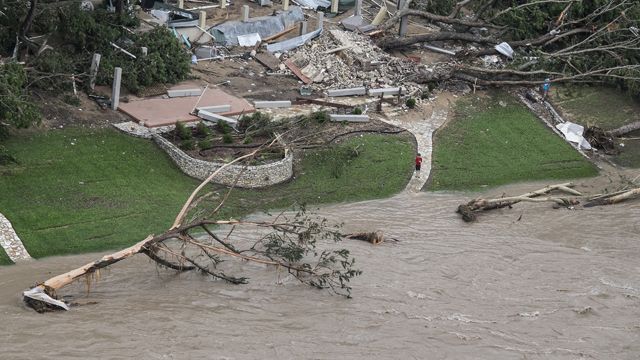 Authorities say 12 missing in Texas floods likely dead, 13 killed in Mexico tornadoPublished May 26, 2015FoxNews.comFacebook79 Twitter371 livefyre421 Email PrintNOW PLAYINGDeadly flooding destroys hundreds of homes in Texas, Okla.Authorities in central Texas ended their search late Monday for 12 people missing after a vacation home where they were staying was swept away by a flash flood.Trey Hatt, spokesman for the Hays County Emergency Operations Center, told reporters that rescue teams halted their search for survivors at nightfall Monday. He said “the search component is over,” meaning that no more survivors are expected to be found in the flood debris. Hatt said recovery operations are expected to begin Tuesday.Witnesses reported seeing the swollen Blanco River push the vacation house off its foundation and smash it into a bridge. Only pieces of the home have been found, Hays County Judge Bert Cobb told the Associated Press. One person who was rescued from the home told workers that the other 12 inside were all connected to two families, Cobb said. KTBC reported that eight of the missing had traveled to the area from Corpus Christi. The house was in Wimberley Valley, an area known for its bed-and-breakfast inns and weekend rental cottages approximately 30 miles southwest of Austin. In Bastrop County, southeast of the state capital, water from the Colorado River breached a dam at Bastrop State Park.The Austin American-Statesman reported that emergency responders had been required to make several water rescues, all of which were successful. An exact number of rescues was not immediately made available, nor was it immediately clear whether there were any injuries.The flooding is the result of storms that have been blamed for at least seven deaths over the long holiday weekend in the U.S., with three in Oklahoma and four in Texas. A man’s body was recovered from a flooded area along the Blanco River, which rose 26 feet in an hour and created huge piles of debris. Another man was confirmed dead Monday when a tornado destroyed four homes in a subdivision outside the city of Cameron, approximately 60 miles northeast of Austin. Milam County Judge Dave Barkemeyer told the Associated Press the man died when his mobile home was destroyed at  about 4 p.m. local time Monday. Four other people were injured.Texas Gov. Greg Abbott flew over parts of the Blanco on Monday, a day after heavy rains pushed the river into surrounding neighborhoods. Abbott said the storms had “relentless tsunami-type power”, and urged communities downstream to monitor flood levels and take the threat seriously. Abbott also added 24 counties to his disaster declaration, bringing the total to 37, most in the eastern half of the state.Late Monday, the National Weather Service declared a flash flood emergency for southwest Harris County as the storm brought heavy rain to the Houston area. The weather service reported 5 to 7 inches had fallen there Monday night and an additional 2 to 4 inches were possible.Authorities urged Houston residents to avoid all travel, and CenterPoint Energy reported that over 70,000 customers in the Houston area were without poewr. The Houston Rockets advised fans to remain in the arena following Game 4 of the NBA’s Western Conference Finals against the Golden State Warriors due to the severe weather in the area.In Mexico, at least 13 people were killed when a tornado ripped through the city of Ciudad Acuna, Mexico, a city of 125,000 on the border with the U.S. Three infants were among those confirmed dead, while five others, including another infant, were unaccounted for. Rescue workers dug through the rubble of damaged homes in a race to find victims. The twister hit a seven-block area shortly after daybreak Monday, around the time buses were preparing to take children to school. Mayor Evaristo Perez Rivera said 300 people were being treated at local hospitals, and up to 200 homes had been completely destroyed.”There’s nothing standing, not walls, not roofs,” said Edgar Gonzalez, a spokesman for the city government, describing some of the destroyed homes in a 1 square mile stretch.Gonzalez said late Monday night that rescuers were looking for four members of a family who were believed missing, adding that there were still areas of rubble that remained to be searched.Family members and neighbors gathered around a pickup truck where the bodies of a woman and two children were laid out in the truck’s bed, covered with sheets. Two relatives reached down to touch the bodies, covered their eyes and wept.Photos from the scene showed cars with their hoods torn off, resting upended against single-story houses. One car’s frame was bent around the gate of a house. A bus was seen flipped and crumpled on a roadway.The Associated Press contributed to this report.