Rush Limbaugh: abortions should be performed with a gun full transcript

After tweeting with the #stopRush dummies all day this little lie kept coming around.

Limbaugh says abortions should be performed with a gun. Rush is ProGun but NOT ProLife!?: #stoprush 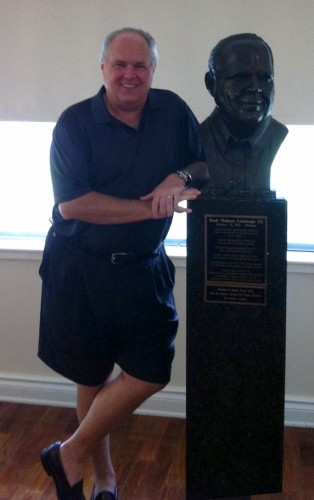 I tried to tell them that the quote was wrong, out of context or that they just don’t get it. maybe even they are not capable of understanding a great mind like Rush. the fact that was very clear is they do not listen to the Rush limbaugh show, and get their info from places like cnn, huffpost, media matters or straight from the other #stopRush crowd.  I highly doubt that any of them have the courage to come here and see the truth or even try to find the truth herein contained. It takes thinking for that to happen.

RUSH:  I’m gonna take a stab at answering my question.  Obama is literally pushing people to snap, attacking the very sanity of the country.  To what end?  Aside from wanting everybody’s name on a list of some kind, why is Obama doing all of this?  I mean, all of this is so in our face.  Everything that people hold dear is under assault, deliberately making people upset.  This is not what presidents do.  Deliberately making people upset.Maybe this is about revenge.  You know, Obama used that word when he was on the campaign trail prior to the election.  He told his supporters in Ohio to go vote and get their revenge.  Revenge against who?  Well, obviously, the people that disagree with Obama.  But who are those people?  He clearly knows who they are, and I think the root of this, I think the answer to my question can be found in the comment that Obama made when he thought he was off the record at a fundraiser in San Francisco, when he talked about the bitter clingers.  These are people that the liberals all know.  These are the not very bright people that want life to never change.  They don’t want any progress.

That birth control mandate was revenge on the bitter clingers. People clinging to their religion when things are happening so fast around them they don’t understand and they don’t like, so they cling to their religion as though being religious is clinging to something.  When people move in that don’t look like them and don’t like them, they cling to their archaic sexist and racist views, and they grab their guns or what have you.  Here’s what he said.  He said, “It’s not surprising then they get bitter, they cling to guns or religion or antipathy toward people who aren’t like them or anti-immigrant sentiment or anti-trade sentiment as a way to explain their frustrations.”

And if you noticed now, Obama has found a way to get back at ’em on every single point.  He is in their face on guns.  He’s in their face on religion. He’s in their face on immigration.  Amnesty by executive order was revenge on those who don’t like immigrants, in his view and the view of a lot of leftists.  You people in Kentucky, for example, you in the hills of Kentucky and West Virginia and in Georgia and the Carolinas, down there in Mississippi, Alabama, you people, you’re the ones, you don’t like all this change so you cling to all these old-fashioned standards.  And you’re holding this country back from moving forward, being modern and so forth.

Maybe that’s it.  But clearly he has animosity for these people that he calls the bitter clingers, and everything he’s done has been in their face.  It really has.  And it continued today with this massive new effort now to stop gun violence, which is what they’re now calling gun control.  I want to go to the audio sound bites here.  Let me go back and replay the NRA ad that has the left in a tizzy.  Well, they were this morning.  They’re a little mollified now that Obama has spoken, but the NRA took it right to Obama.

ANNOUNCER:  Are the president’s kids more important than yours?  Then why is he skeptical about putting armed security in our schools, when his kids are protected by armed guards at their schools?  Mr. Obama demands the wealthy pay their fair share of taxes.  But he’s just another elitist hypocrite when it comes to a fair share of security.

RUSH:  Ooh, you don’t do that.  You don’t call Obama an elitist hypocrite.  His kids are more important than yours, and you should damn well know that.  You should respect that.  His kids are more important than yours.  He’s Barack Obama.  He’s more important than you are.  You ought to understand it’s okay for him to do whatever he has to do to stay safe, ’cause he’s our leader.  We’re nothing without him.  And he’s nothing without his family.  You’ve got to understand that.  We can lose your kids.  We can have your kids get kidnapped, and that’s one thing, but not his kids. Oh, no.  The country can’t put up with that.

A bunch of leftist bloggers actually started tweeting things that I just said.  His kids are more important than yours.  Yes, they are.  He’s the leader.  He’s a Dear Leader.  He’s entitled to better food than you have. He’s entitled to more travel, better travel. He’s entitled to a nicer house than you, because we all need him.  That’s what they think.  Here is the state run media in lockstep on this.

NORAH ODONNELL:  The NRA gets personal against the President.

JON KARL:  A harsh, personal attack on the President.

SAVANNAH GUTHRIE:  An ad that gets very personal.

CAROL COSTELLO:  It’s personal now, a new NRA web ad makes no bones about it.  We’re going for the jugular.

It’s not personal! No, no! See, Obama’s never personal. Obama’s the essence of a wonderful spirit. He’s the essence of perfection. The NRA, that’s getting mean and nasty and personal now. So Obama can say whoever or whatever about whoever he wants, and it’s just the way it is — and you better damn well agree with it. If you don’t, and if you voice your disapproval, you’re “getting personal,” and that makes you a target. You don’t do that. Not at all.

Here is Yvette, Gainesville, Florida. I’m glad you waited. Great to have you on the EIB Network. Hello.

CALLER: Hey, how are you?

RUSH: Good. Thank you very much for calling.

CALLER: Oh, thank you for having me on. Okay, gun violence is gun control. I like the comments of the children standing behind him and writing the letters. But are they the same the children who wrote letters to Santa Claus, hoping that he’s gonna bring them toys and gifts, that Santa Claus who isn’t real? So we’re gonna put our thoughts or our hopes behind…?

RUSH: Are you questioning the president’s commitment to the safety of those children?

RUSH: That’s true. I’ve often wondered, what is so hard for the left to understand about that? By definition, if you have gun control laws, the law-abiding will be the only people that don’t have guns. In fact, the most stringent gun control laws in the country today are DC and New York and they’ve got the highest crime rates with guns. Doesn’t that tell them something? So it must be something not to do with guns. It’s gotta be about something totally different than gun control.

CALLER: I think it does. It’s just terrible that 26 people died in Sandy Hook and 20 of them were children. Terrible. Very sad, coming up to Christmas. Hopes and dreams the young children had, their parents and weddings and congratulations that will never occur. However, on any given day in America, more than 3,000 children are killed from abortion, and we have no problems with that. We’re okay with that; it’s not an issue.

RUSH: Well, it’s a good point. You know how to stop abortion? Require that each one occur with a gun.

so now you see the whole truth in context and it is what i said you libs just don’t get it. you’re to narrow minded to understand, your news source is lying to you. you seek neither truth nor enlightenment.