In New York it may soon be an illegal, jail able,  felony offense to annoy a cop. OK, so what is annoying: <their constant complaining annoys us>… sure that would “annoy ” a cop but should you go to jail for that? If you spend some time on YouTube you can find thousands of videos of asses trying to annoy cops with stupid stunts to get some point across and while we all find that annoying it’s anything but illegal. Those of us that pay attention have seen the fight over OUR right to film cops and other government officials while “on duty” ,  and yes, they tried to fight back with “wire tapping laws” but even the most insane courts found that we have a right to film. I’m sure under this new law, that if passed will spread like a wild fire to other states, cops will find that being filmed is very irksome.

Bothering a Cop can be really easy again see YouTube not all the videos are asses most are good people pulling out a cell phone to catch a cop abusing power and squishing rights. You’ll see cops grabbing phones with out warrants, arresting  or detaining people for no real reason other than the cop is “annoyed” at being filmed doing something wrong.

Excuse me officer will you stop beating that man you have cuffed on the ground? Hay! you can’t just walk in to my house and take my kid!  Will you stop harassing me and go catch some real criminals like drug dealing rapist murders?

All these questions and more, in fact any question, put to a cop could get YOU jailed for up to four years under this law, if the cop you’re asking finds them annoying. If this is the case then it IS the END of FREE SPEECH. 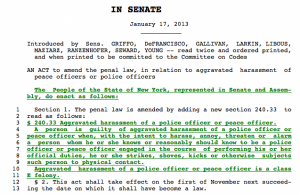 annoy, vex, irk, bother mean to upset a person’s composure.annoy implies a wearing on the nerves by persistent petty unpleasantness <their constant complaining annoys us>. veximplies greater provocation and stronger disturbance and usually connotes anger but sometimes perplexity or anxiety<vexed by her son’s failure to clean his room>. irk stresses difficulty in enduring and the resulting weariness or impatience of spirit <careless waste irks the boss>. bothersuggests interference with comfort or peace of mind <don’tbother me while I’m reading>.