Sarah Palin Was Just Sued For This | TheBlaze.com 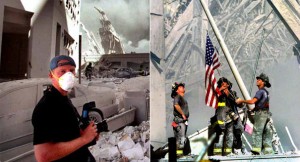 Former vice presidential candidate Sarah Palin was sued Friday in federal court by a New Jersey-area newspaper publisher for alleged copyright infringement over her use of a 9/11 photograph.

The lawsuit was filed in Manhattan federal court by North Jersey Media Group Inc., according to the Associated Press.

HOUSTON, TX – MAY 03: Former Alaska Gov. Sarah Palin waves before speaking during the 2013 NRA Annual Meeting and Exhibits at the George R. Brown Convention Center on May 3, 2013 in Houston, Texas. More than 70,000 peope are expected to attend the NRA’s 3-day annual meeting that features nearly 550 exhibitors, gun trade show and a political rally. The Show runs from May 3-5. (Credit: Getty Images)

The publisher is accusing Palin’s SarahPac of posting a copy of an iconic September 11 photo on her website and Facebook page without their explicit permission.

The photo shows three New York City firefighters raising an American flag over the rubble left in the wake of the World Trade Center attacks.

via Sarah Palin Was Just Sued For This | TheBlaze.com.