Thunderstorms wreaked havoc in portions of the mountains and desert of San Bernardino County on Sunday, killing one person, clogging key access roads with rocks and mud, submerging cars and prompting “shelter in place” orders for at least 3,000 people.

One person was killed in the Bear Creek community, near Mt. Baldy, when debris swept a car off a roadway and into a swollen creek, authorities said.

One man in the Forest Falls mountain community was forced to escape a debris flow by climbing a tree. Most vehicles that were submerged in streams or floods were searched and found empty, authorities said.

County resources were stretched thin by the storm. Scores of swift-water rescue teams and fire engines had been dispatched to far-flung reaches of the county, said county Fire Capt. Josh Wilkins.

“Every rescue unit we have, every fire engine we have in San Bernardino County” had been sent out, Wilkins said. “We are literally approaching the maximum right now in terms of our call volume.” 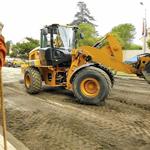 The storms showed little sign of easing up. Typically, weather patterns in the area calm down at night. But by about 7 p.m., some of the more significant weather cells appeared to be circulating back toward the Forest Falls area after pummeling the San Bernardino Mountains and stretches of the Angeles National Forest.

“The whole thing could be repeating itself,” Wilkins said. The county was considering putting out a call for assistance to neighboring communities.

The first days of August have been surprisingly wet in Southern California, with unusual humidity and showers throughout the region. The troubles in San Bernardino County appear to have started with a thunderstorm that began in the Claremont area Sunday and spun off like pinwheels into the mountains and the desert.

In Bear Creek, several hikers were lost in bad weather and were rescued. Heavy flooding was reported.

ADD A COMMENTSEE ALL COMMENTS

In the Mt. Baldy area, debris flows were heading toward homes. Creeks swelled into rivers, submerging cars, Wilkins said. Authorities issued an order telling residents to shelter in place. One group rescued by emergency crews had been trapped in a home that was threatened by flooding and moving debris.

There were also reports of exploding propane tanks. Rescue teams were planning to search mountain cabins one by one.

The primary roads leading to Mt. Baldy were effectively blocked by rocks, mud and other debris. Rescue crews from the county, the city of Rancho Cucamonga and Los Angeles County fanned out in the area.

The community of Forest Falls was particularly hard-hit. Valley of the Falls Drive was also blocked by debris, and a bridge was washed out — and it’s “one road in, one road out,” Wilkins said.

Flooding was reported throughout the mountain community, which was teeming with both residents and campers and other recreational visitors.

“The rest of the town is still cut off,” said public information officer Ryan Beckers.

At one point, more than 500 people were headed to a one-day conference in the area, and their convoy of cars was trapped in a debris flow. All have been accounted for, Wilkins said. It was unclear what sort of conference had been scheduled.

Two people were rescued from fast-moving water and were not injured, and a shelter had been established at a community center.

Between Mt. Baldy and Forest Falls, about 3,000 people had been ordered to remain where they were until the weather cleared.

Also, a swift-water rescue team had been dispatched to a remote area along California 62, where two parallel flash floods had trapped eight to 10 cars. Compounding the problem, at least 150 people had stopped to watch the rescue operation from the edge of the water, which “creates even more concern for us because they could become victims too,” Wilkins said.